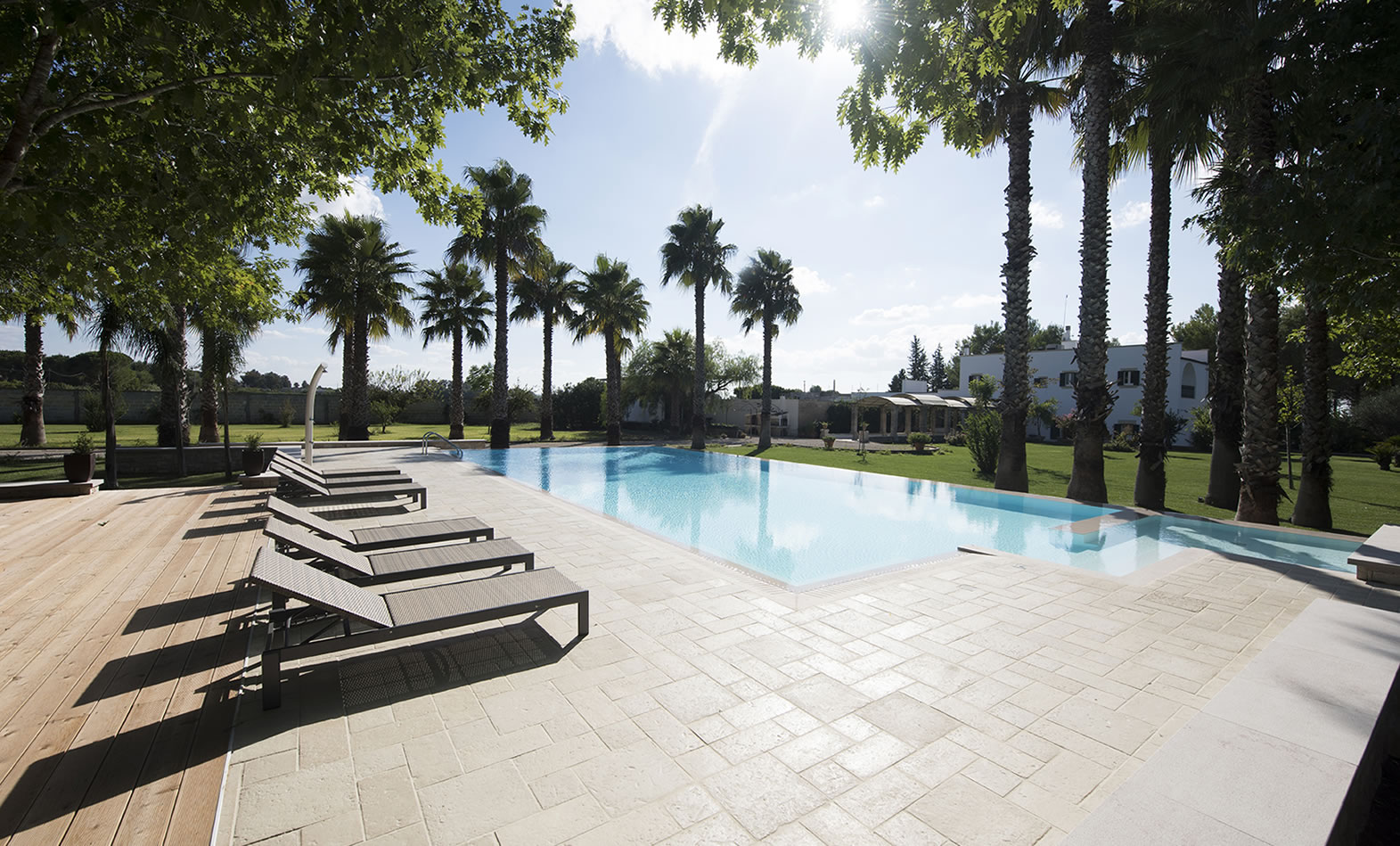 Project for a private  swimming pool, entirely  in keeping with the Mediterranean surroundings  and composed of strong technological parts.

The Concept of the project is inspired by old tanks used for collecting meteoric waters, used in the past in Mediterranean territory.

A set of terracings, flights and staircases following the walk of the ground creating the seven accesses to the two tanks, to the relax area and changing rooms, which distinguish this project.  Studied for being integrated to the arboreal preexistence and to the old Masseria , the project recalls the stone materials used for construction of muretti a secco , which sketches boundaries and sittings of it.

“Muretti” are straight lines that intersect and insert in the terrain, getting the surrounding space involved and making it an integral part of the project.

Trees appear from the wooden platform, relax/shadow area, where the owners and their guests can relax and rest during the hottest hours of the day.  The choice for Solarium paving  and access is the stone of Acaya, a material rebuilt with new technologies, strong and breathable produced by Primiceri Manufatti, a local company;  it’s totally integrated with the other selected materials, allowing to have an architectural coherent language related to Mediterranean territory.

Changing rooms follow the impact zero regulation of planning, they’re entirely made with “a Secco” technique with an iron structure and a wood layers covering both on the walls and as upholstery.

Systems (electrical system and water system) are integrated to the structure. Also, a well for phytopurification  and recycle of meteoric waters is been made and it’s useful for garden maintenance and for platforms cleaning.

The “specchio d’acqua”  is divided in two parts,  the central one is provided with internal sittings with six nozzles for hot tub, stone trampoline and RGB lights which can change the color of the water in six different  colorings; the small tank, 23 inches tall, is useful for children or for the ones who love to relax in the water and enjoy the sun.  Both of them are connected with an underwater passage placed on the main entrance staircase.

The swimming pool shows two cascading edges that, activating the water mechanism, increase the flow rate passing the outside banquette made of Trani stone and create an interesting acoustic and scenic effect;  the other two sides next to Solarium are infinity kind edges.

The falling water  is collected through a perimeter drain covered with various size pebbles and brought back in the regulation tank.  The water in the swimming pool can be heated thanks to heat pump up to a 75° F  temperature, which allows the swimming pool to be used even in coldest months of the year or during night time.  An exclusive comfort for customers and their guests.

The attention in scenic design of the project  is been nearly obsessive and respects  the elegance of the features of the surrounding landscape.  The “muretti”, boundaries, are emphasized during night time by LED light beams, integrated in the drains used in the “muretti” covering.

This allows to have a fluctuating perception of the entire project and a constant and safe lighting.
Nature and Architecture embrace and solve a need, making this project unique and special.
Rewarded at Italian Pool Award 2016, it’s one of the most beautiful swimming pool created in Italy. 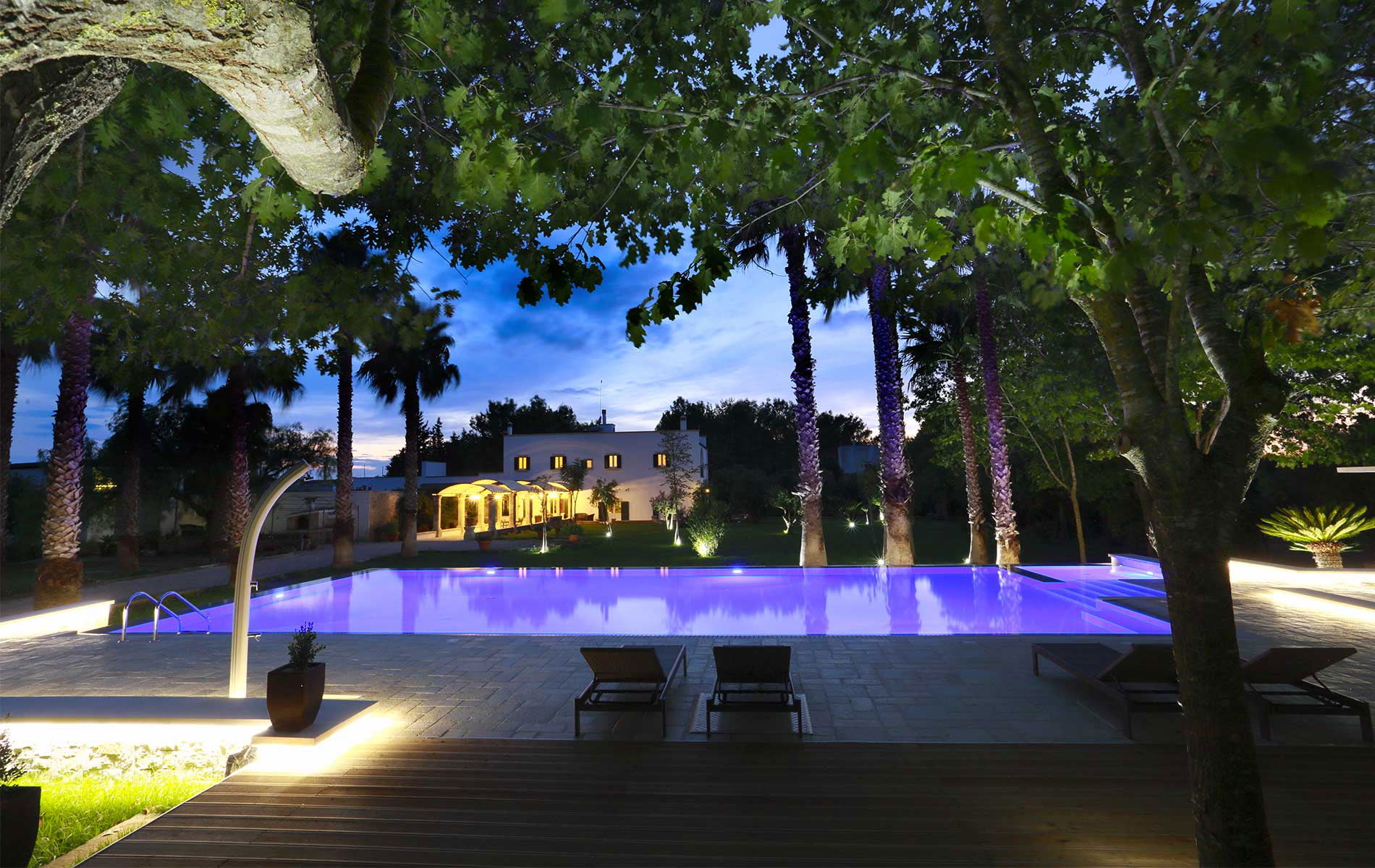